Tower A2 keeps trains on track

Every day, thousands of Metra riders zip past a nondescript tower near Grand and Western in Chicago without realizing the crucial role it plays in their commute.

“You really know you’re doing the job right when no one knows you’re here,’’ says Rich Oppenheim, who as Trainmaster for Metra’s Union Station District oversees the tower workers.

All Milwaukee North, Milwaukee West, North Central Service and UP West trains travel through the interlocking – the railroad term for the switching complex – on their scheduled runs to and from Union Station or Ogilvie. In addition, trains coming in and out of Metra’s Western Avenue yard or UP’s California Avenue yard for maintenance or servicing also pass through the area – and those trains aren’t on a set schedule. Counting the odd freight train and a few Amtrak trains that roll by, the tower is responsible for arranging and rearranging the switches for more than 350 trains each day.

Stand in front of the machine used to throw those switches and you’ll be thrown back in time by about 80 years. The mammoth apparatus, which takes up a good chunk of the second floor of the tower, was installed in 1932, decades before there was any railroad named Metra. At that time, it was the state-of-the-art technology, the Cadillac of switching machines. A series of red and black handles and blue and red indicator lights line the front of the dull green-and-grey machine. Move one of the handles, and a burst of air almost instantly moves the switch connected to it. It’s actually faster than an electric switch, and that speed is essential at such a critical and busy junction. (There are no fewer than two spare air compressors on hand in case the main one breaks down, because of the importance of maintaining operations at the interlocking.) 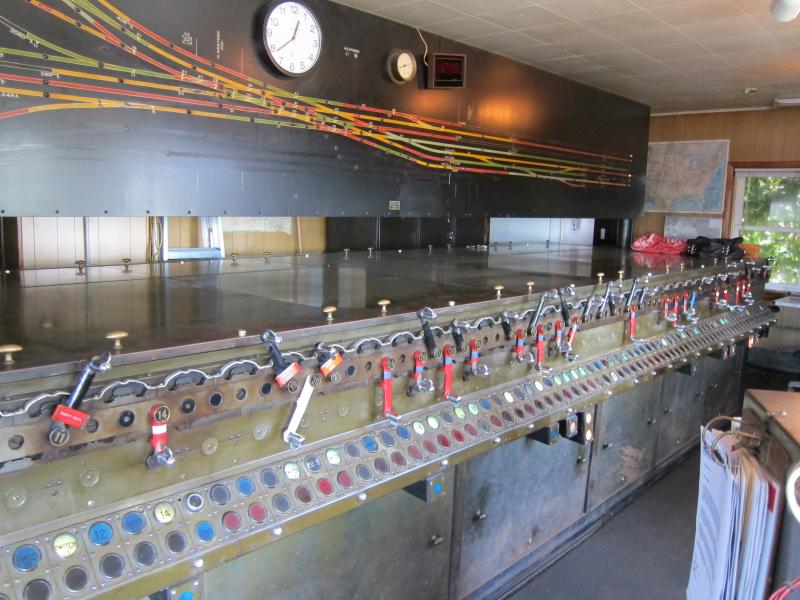 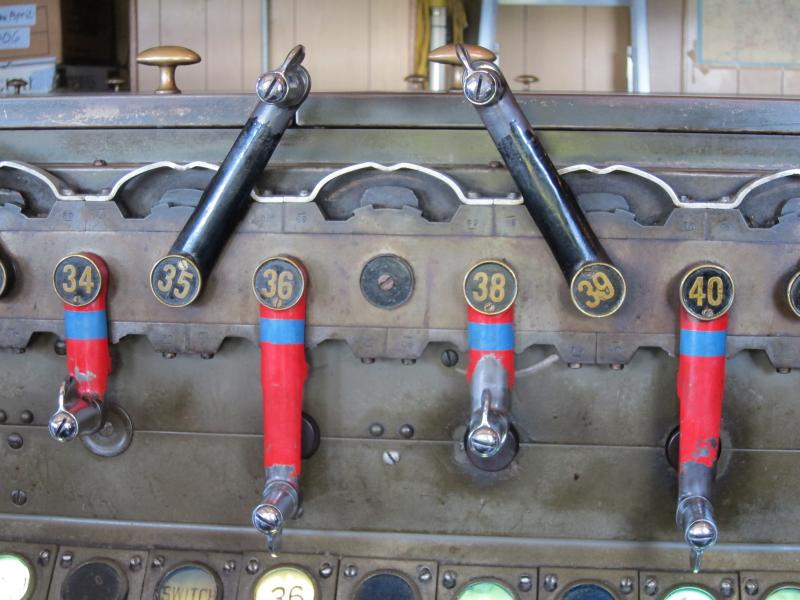 The massive switching machine in Tower A2 uses air pressure to almost instantly move the switches. The machine is nearly 80 years old but was clearly built to last.

While the oldfangled controls could be disconcerting to anyone accustomed to touch screens and computer technology, the machine was clearly built to last, and it has. Plus, it’s cool in its own retro way.

Above and behind the machine is a colorful diagram of the interlocking that looks like it belongs in a railway museum. All the tracks that pass through the area are represented, and lights on the diagram show the progress of trains along those tracks and through the interlocker, helping tower workers know the location of trains passing by. You can tell by blacked-out train lines on the diagram and empty spaces on the switching machine that the tower at one point handled even more tracks and switches than it does now. Even with what’s left, it’s complex.

Not to Dave Reiss and Stacie Kransdorf, however. He’s the Train Director and she’s the Leverman who staff the tower during the morning rush hour period. He communicates with the trains and dispatchers, then tells her which train is coming and what track it should use. She stands in front of the machine and throws the levers to line the switches up in the right way for that to happen. They work together smoothly and efficiently, their calm demeanor in stark contrast to the busy rail traffic outside their window. 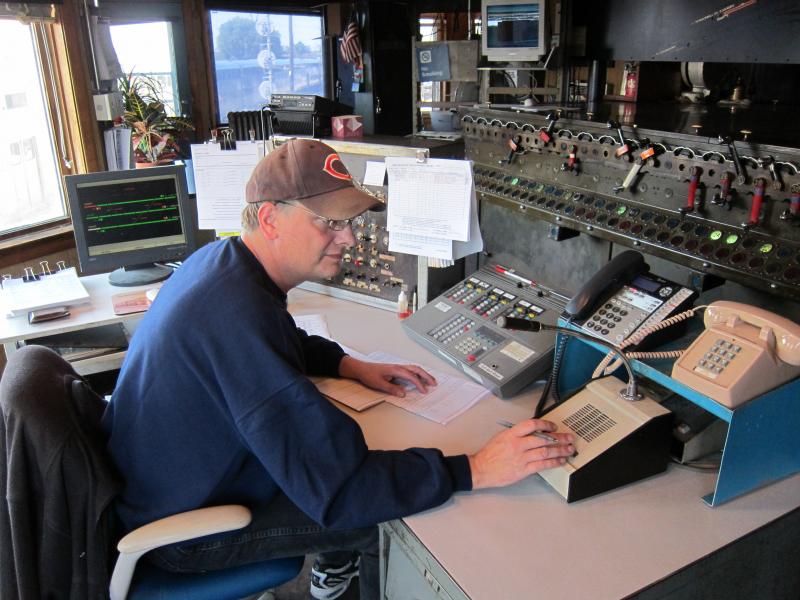 Train Director Dave Reiss communicates with dispatchers and engineers about which trains are about to enter the complex system of switches at Tower A2.

Before she started, Kransdorf was required to know every route and the switches needed for it. She clearly has everything memorized. When Reiss tells her what he needs, she starts moving all the right levers. It’s like watching someone count rapidly with an abacus – it’s hard to follow, but fast and effective.

While the job has become routine and old hat to her by now, she realizes she plays an important role in the daily life of thousands of commuters. “Getting people to work on time and safely is very gratifying,” she said. 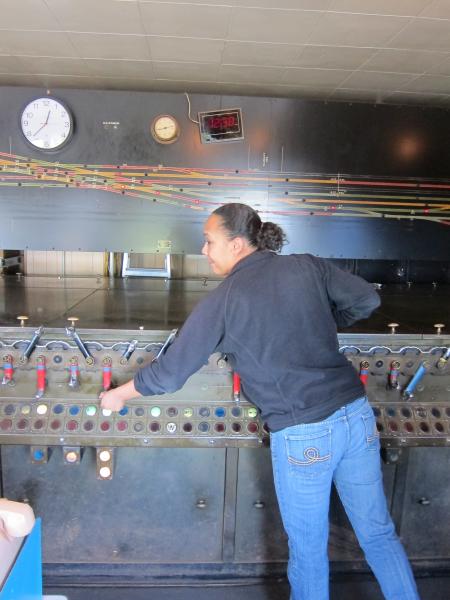 Leverman Stacie Kransdorf lines up the switches for one of the 350 trains that pass through the A2 interlocking every day.

As for Reiss, he knows most people don’t think about the work he does, because he never did before he came to Metra either. “I had no idea there were people that had to do all these jobs,” he said.

Unfortunately, if a problem occurs with a switch at A2, it can create a major bottleneck due to the high volume of trains coming through. There are sometimes ways to line up the switches to route trains around a problem, but not every time, and even if it can be done the detour will be slower than the normal route. That’s why there is a signal maintainer at the tower from 6 a.m. to 10 p.m. – so problems can be fixed as soon as possible.

Usually when a switch fails, it’s an adjustment problem with one of its many moveable parts, especially when it’s unusually hot or cold. Those repairs can typically be made fairly quickly. But if one of those parts break, or if there is a grounded wire, then repairs can take much longer, and delays pile up.

Although A2 still functions adequately, it has reached the end of its useful life and should be replaced. That will be incredibly complex and expensive. The ideal solution – a bridge that takes one set of tracks over the other – could cost $180 million. The need is just one of the reasons why Metra has been stressing the importance of maintaining a state of good repair on the system and using capital dollars for capital projects.

In the meantime, Metra is doing what it can with the resources it has. We have rebuilt the mechanisms that switch the tracks, changed the steel in the switches and replaced most of the signal wire. Those changes will help maintain and improve the reliability of the interlocking so our riders can continue to pass through A2 without noticing it’s there.