When the going gets tough: restoring the Metra Electric | Metra

When the going gets tough: restoring the Metra Electric

When the polar vortex came roaring into the Chicago region in late January, bringing the coldest temperatures the region had experienced in more than three decades, businesses closed, schools canceled classes and the U.S. Postal Service suspended deliveries. Amtrak canceled service and thousands of flights at Chicago’s airports were canceled. Metra, using data and the experience it gained from the 2014 polar vortex, made the decision early in the week to operate all of its lines on a reduced schedule.

This schedule was designed to meet the anticipated ridership demand, reduce the number of train moves that required switching tracks to prevent service disruptions, and reduce wear and tear on equipment caused by operating in such extreme conditions. It would also leave equipment and crews available to be dispatched should a mechanical failure or other incident prevent a train from completing its run. In such extreme conditions, a train breakdown could quickly threaten the safety of our passengers and train crews.

But even the best plans were no match for the impact of the extreme cold on the Metra Electric Line. Overnight, air temperatures across the region dropped below -20 degrees and wind chills were below -50.  The extreme cold caused the overhead wires that power the trains to contract so severely that the pantographs atop the railcars, which draw the power from the overhead lines, had to raise so much higher than normal to make contact with the wires that they were becoming entangled with the signals and other infrastructure. At about 7 a.m., Metra was forced to cancel all service as the pantographs brought down the DC wires at 31st and 67th streets and pulled a wire splice apart at 18th Street.  Earlier in the morning, the Northern Indiana Commuter Transportation District’s (NICTD) South Shore Line had been forced to annul all service after encountering the same issue with the pantographs.

This is when the extreme cold dealt the Metra Electric Line a second blow.

Normally, Metra’s repair crews would be dispatched on tower cars, a specialized piece of equipment that provides a rooftop platform that can be raised and lowered as well as a workshop area and enclosed crew area below. The tower cars allow multiple workers to assist in the repairs and for work to continue without the need to leave the site for materials and rest breaks.

Unfortunately, the extreme cold caused the tower cars’ hydraulic fluid and fuel to gel, disabling the equipment. Even equipment that had been stored inside overnight began to fail within minutes of being deployed. This meant that repair crews had to use bucket trucks to access the overhead wires. This also meant that only one worker at a time could be up in the bucket making repairs, greatly slowing the process. However, Metra believed that by canceling service on the Metra Electric Line for a second day (Thursday, Jan. 31), it would be able to complete repairs and restore full service by Friday morning.

Then came the third blow.

Looking north towards the Harvey Station and surveying the damage on Thursday, Jan. 31

At approximately 7:30 p.m. on Wednesday, a CN freight train operating on a track adjacent to Metra’s ran through a switch and derailed just south of the Harvey Station. The derailment knocked the structure that supports all the overhead wires down and across the tracks, damaging not just the wires and support structures but also two power substations. Some of the personnel who were dealing with the damage from earlier in the day were then dispatched to contain the scene, assess the damage and protect the overhead wires from further damage. 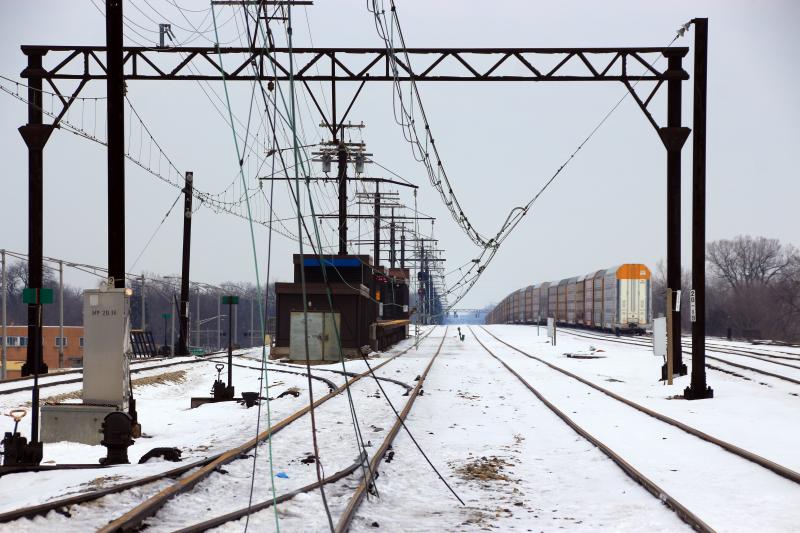 With the Harvey Station in the background, the extent of the wire damage over Track 2 is clearly visible.

Once the derailment scene was stabilized, the decision was made to focus workers on the repairs at 18th, 31st and 67th streets first so that rail service on the northern part of the Metra Electric, including the branch lines and NICTD’s South Shore Line, could be restored. However, the time needed to stabilize the derailment damage and the fact that we were unable to use our tower cars meant that Metra was further behind in its plans to restore service. All Metra and South Shore trains were again canceled for Friday and Saturday. 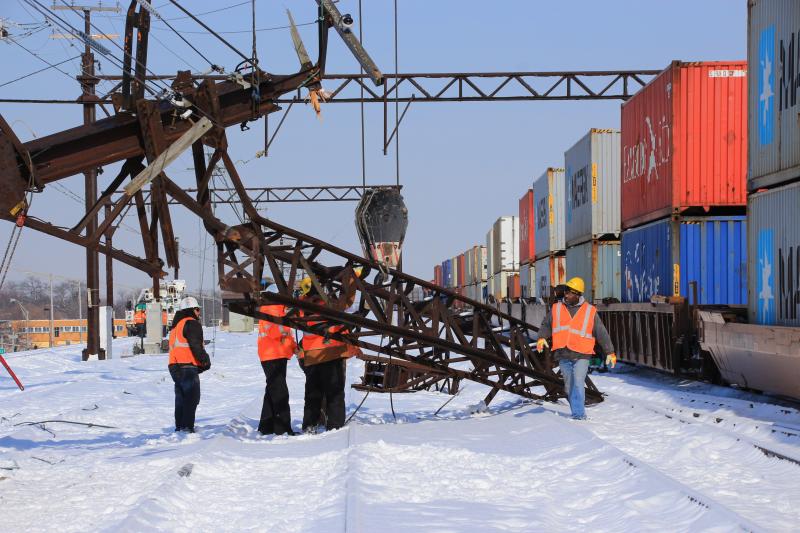 As a CN freight moves through the area, Metra workers attach a crane to stabilize the damaged support structure (Feb. 1).

The extreme cold also meant that employees had to limit exposure and watch for signs of hypothermia and frostbite. At the worst of the polar vortex, employees were rotating in 90 minute cycles to keep the repairs progressing.

“When you’re using bucket trucks, it doesn’t just limit the number of people that can be working at one time,” said Larry Powell, Metra’s senior director of engineering maintenance. “It also limits how quickly you can swap out workers since the bucket is also being used to maintain tension on the wire. Such extreme conditions were a complicating factor as workers also had to remain vigilant and ensure that they weren’t over exposing themselves to the cold.”

Although service on the northern part of the line was restored by Sunday, Metra forces still had to deal with the damage from the CN derailment that was blocking the southern segment of the rail line and creating a commuting headache for thousands of riders in the south suburbs. It required another seven days to completely restore service on the line.

“It’s more complicated than just cleaning up the damage and installing new components. In addition to the fact our DC electricians are dealing with 1,500 volts of direct current, the lines are held in place by tension,” said Edward Schafroth, Metra’s director of electrical maintenance.  “Any sudden break in this tension could cause even greater damage in either direction from the break, so it becomes as much a matter of ensuring you don’t do more damage when you touch the wire to repair it as it does making the actual repair. This slows the process, especially in the cold.”

With the wires held under 10,000 pounds of tension, the goal was to prevent additional damage that could be caused by disrupting that tension. The catenary structure destroyed by the CN derailment couldn’t be simply picked up and removed. All the wires that hadn’t been torn down by the incident had to be secured. Metra hired two cranes to help with the process. One crane held the structure steady while the other was used to stabilize and maintain tension on the wires. 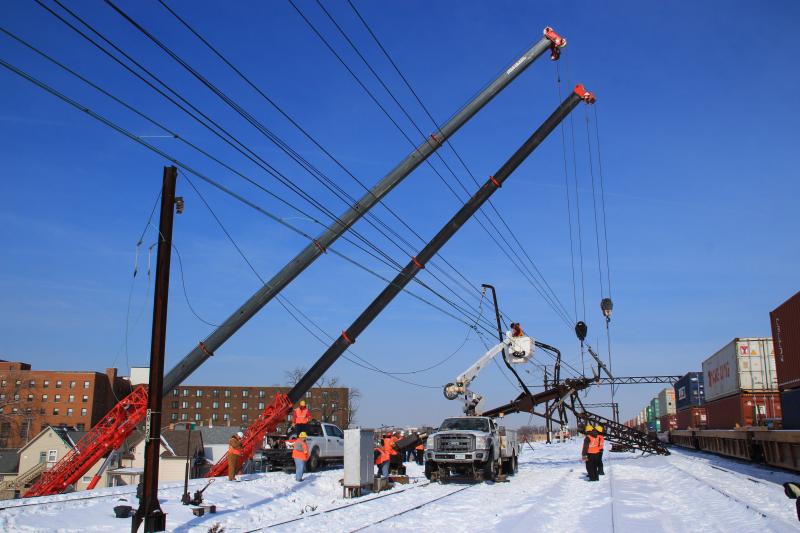 With cranes stabilizing the wires and the damaged support structure, a Metra DC electrician in a bucket truck begins work to detatch the wires. 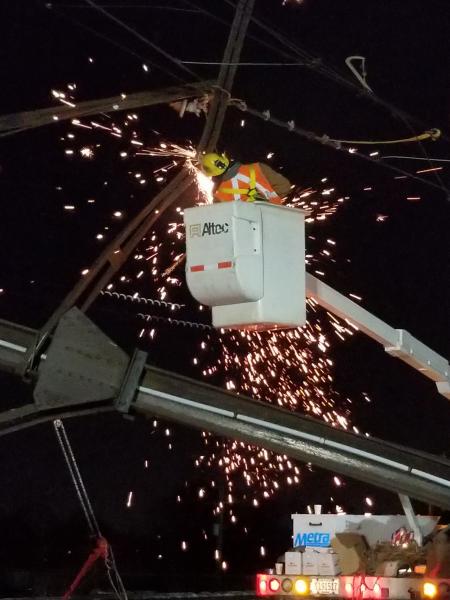 Work continued around the clock.

Once this was done, crews from Metra’s Buildings and Bridges Department (B&B), began the process of removing the damaged catenary structure and preparing the site for its replacement. A temporary structure had been manufactured by Metra’s Mechanical Department at the Kensington Avenue Yard and brought by rail to the site where it was set in place on Saturday. 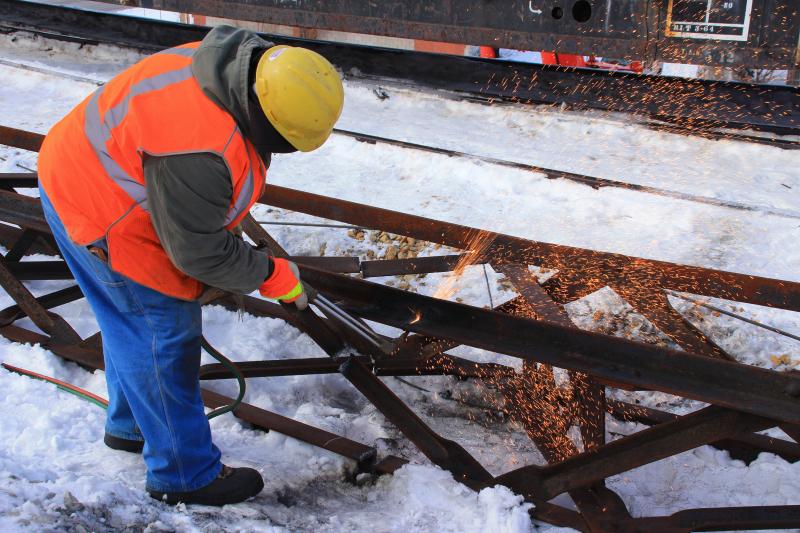 A Metra B&B employee uses a torch to cut up the damaged structure so that it can be hauled away. 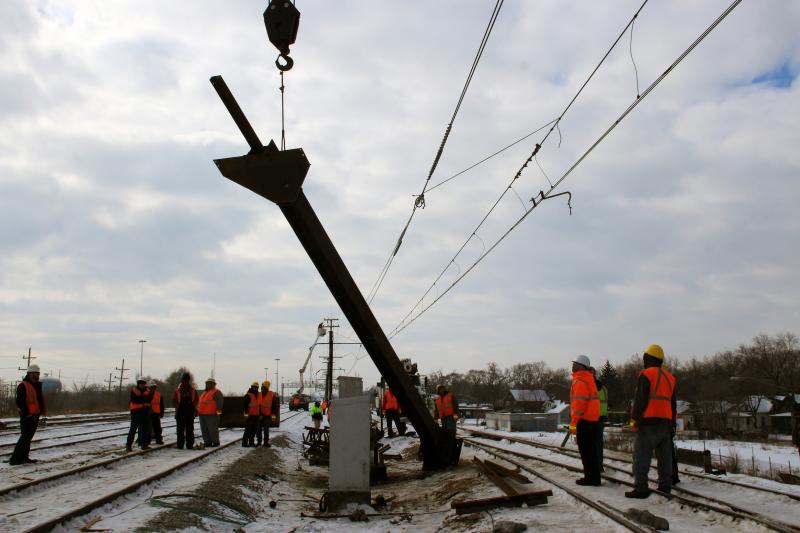 A crane lifts the temporary support structure into position on Saturday, Feb. 2. 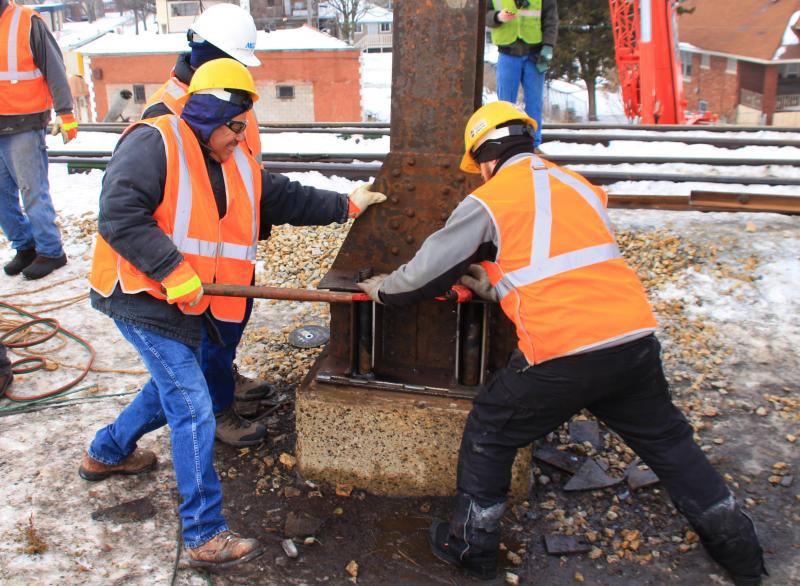 Then the real work of restoring service began.  Since the majority of the damage was to the wires supplying power to one of the two tracks, the decision was made to focus the remainder of the weekend’s work on restoring service on the least damaged track for the weekday rush. One track service meant that Metra wouldn’t be able run to its full volume of rush hour trains, but it did allow Metra to provide at least some service for commuters without other options.

Repairs continued throughout the week and full service was restored for the morning rush hour on Monday, Feb. 11. 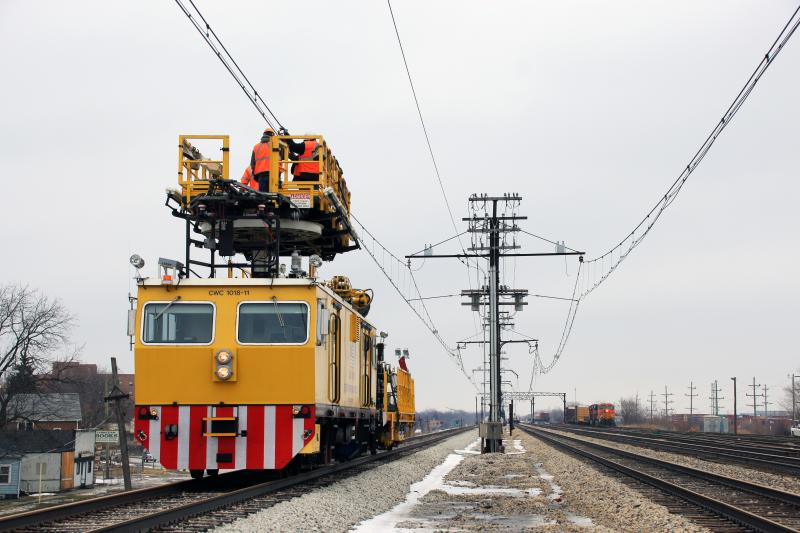 A work crew travels along in a tower car Sunday, Feb. 3 preparing to restore one track for limited service for the Monday morning rush.

Many of these repairs were temporary, with the aim of restoring service as quickly as possible. Metra crews will be making a more detailed assessment of the damage and plans for repair projects, including the placement of a permanent catenary structure near Harvey this summer.

All in all, about 40 Metra employees were involved in the repair process, with crews working around the clock for 12 days. Several DC electricians and B&B employees worked four to five days straight taking periodic breaks in the trucks to warm up and catch a little sleep. Metra managers also put in long hours, with at least one manager on site for more than 40 hours straight.  Perhaps the most significant statistic from all the hours put in under extreme conditions is that not one employee injury occurred.

And it wasn’t over. Just one day after restoring service, the Metra Electric Line was again forced to suspend service on Tuesday morning, Feb. 12 when an ice storm coated the wires and the rails. A second CN derailment near East Hazel Crest nine days later on the evening of Feb. 21 halted service on the southern portion of the line once again. The derailment damaged a signal structure used by both railroads that spanned the Metra tracks. This time the workers were able to stabilize the structure and restore Metra service the same day.

The series of incidents created significant hardship for many Metra Electric riders, prompting, Metra to give Metra Electric Line riders a 15 percent discount on their April Monthly Pass as compensation for the service disruptions.

Some but not all of the employees involved in restoring Metra Electric Line service pose with the Metra Board of Directors at their February meeting.