Tie Replacement Takes Over the J-Line

A curious parade has taken the place of train service on the Milwaukee District North Line. 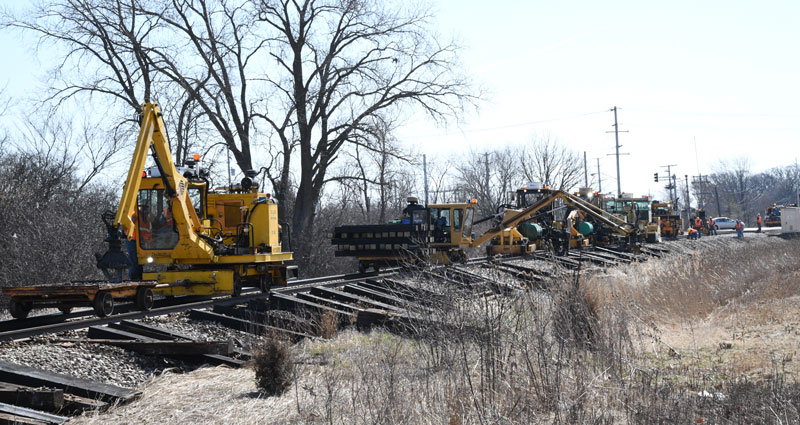 On the northernmost part of the route, along a 17-mile, single-track stretch from Rondout to Fox Lake known as the J-Line, Metra’s Engineering forces are replacing 17,000 railroad ties. The project – the most significant undertaking of its kind on the line in at least a decade – requires a series of machines, each specialized to complete a particular step in the tie replacement process.

Operating like a factory where the machines move, they range in size from a compact car to a semi cab towing a flatcar holding a crane. They sweep, grab ties, pull spikes and shake the ballast in place. And, ultimately, they improve the safety, reliability and quality of service for Metra’s customers.

The first machine in the lineup is a tie crane assigned to stage bundles of new ties. The machine features a lifting arm and cab that can pivot 360 degrees. For the purpose of distributing ties, it is attached to a pushcart carrying the new ties. 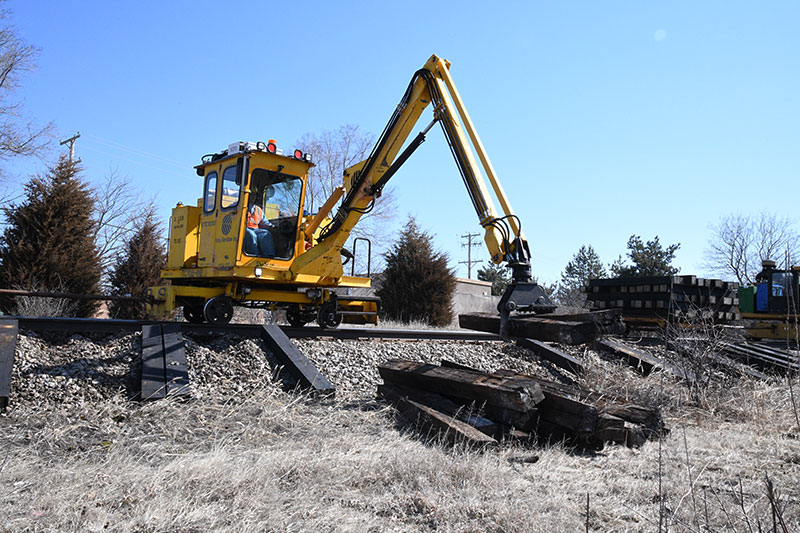 Then comes the cadre of spike pullers. By using more than one machine, each operator can focus on pulling spikes on designated sides of the ties to expedite the work. This group is followed by a machine that picks up the discarded spikes, which can be reused or recycled.

Now it’s time for the ties themselves to be removed. A machine called a tie inserter/extractor grips the ties and pulls them from underneath the rail.

A small green machine rolls behind the tie inserter/extractor, the anchor spreader. This machine’s job is to use a small arm to open the anchors – steel pieces that help keep the ties in place – so new ties can be inserted easily. As the anchor spreader rolls away, along comes another tie crane. This one’s job is to get the old ties out of the way by placing them in piles along the right-of-way. Another tie crane distributes the new ties so they are ready to be inserted. Then, a second tie inserter/extractor actually inserts the ties. 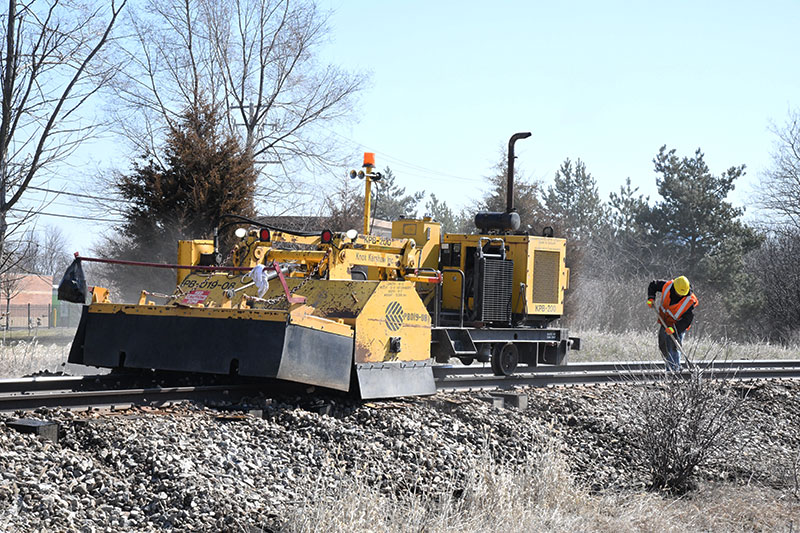 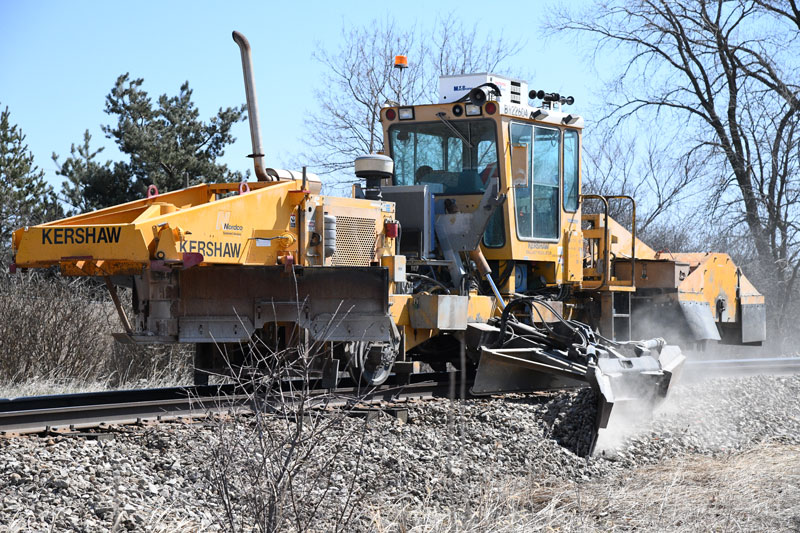 Next, a long and low broom machine sweeps the ballast back over the ties and a tamper comes to pack the rocks under the new ties. Tie plates are then put in by hand, with the assistance of a machine that lifts the rail slightly. A spiker (think the railroad version of a pneumatic nail gun) inserts spikes into the ties. Another small, green, Seuss-like machine arrives to reset the anchors.

The machines that follow are less “Lorax” and more “Mad Max.” The ballast regulator uses plow-stylewings to shape the ballast and ensure it has the appropriate profile to support the newly inserted ties and a track stabilizer applies controlled force to the track to compact the ballast so it is ready for regular rail traffic.

Finally, a Brandt rail truck – a semi cab that can run on the rails and on highways – hauls a flatcar behind it carrying a crane that picks up the discarded ties.

The number of ties that can be replaced within a workday varies greatly depending on the weather and track conditions. On average, Metra’s Engineering team has replaced 630 ties a day on weekdays (work is restricted to off-peak hours). Weekends have been more productive given the larger window crews have to work. On Sunday, April 15, Metra forces replaced more than 1,600 ties. 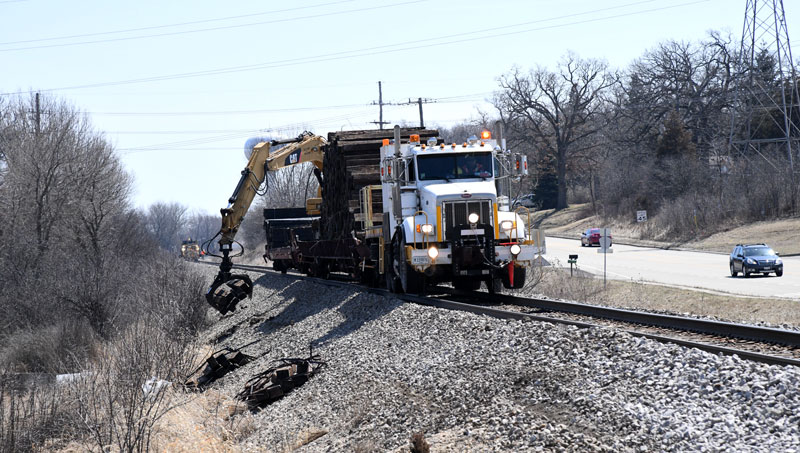 Metra’s ability to complete this project has relied on our customers’ patience. The work has required the shutdown of the line north of Lake Forest for three weekends and impacted midday service on weekdays north of the Grayslake Station. But customers should find some comfort in knowing the project is almost complete. Work will wrap up on Sunday, April 29. And once this project is complete, the next major replacement won’t need to happen for another nine to 10 years. 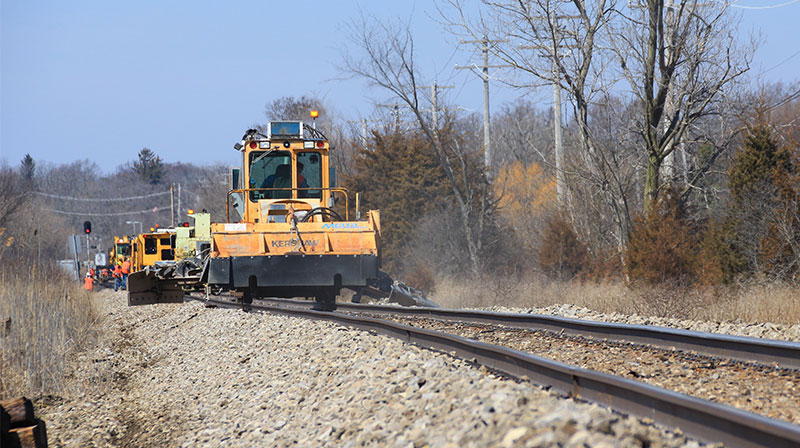