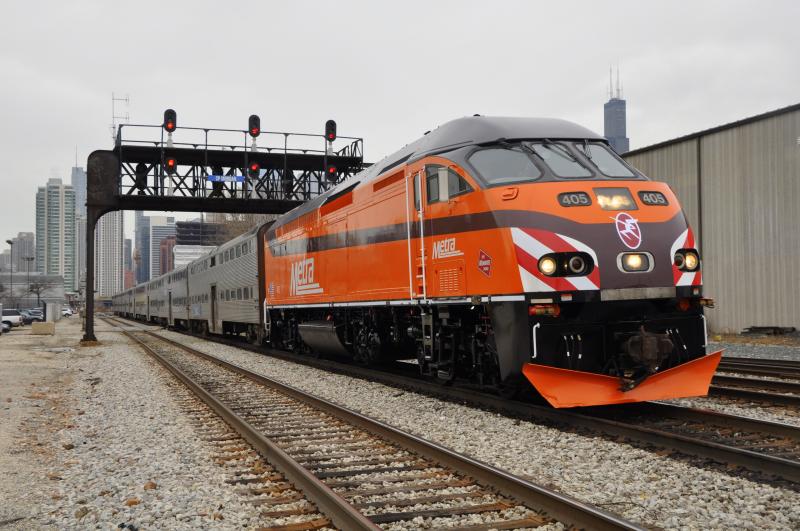 Late into the evening on Wednesday, Jan. 9, a group of Metra railroaders organized via email an early morning plan to place a special decal on Locomotive 405, which had just been painted in heritage colors of the old Milwaukee Road railroad. The decal wasn’t a part of the original plan for this locomotive; it was strategized and printed on the railroaders’ own time and dime, but in their eyes, it offered a chance to see a significant part of railroad history live once more on the rails.

The decal in question was one that was emblematic of a popular passenger rail line, an icon of the golden age of passenger rail travel. The stoic, powerful figure that became the icon and namesake of the Milwaukee Road’s Hiawatha routes was based upon Henry Wadsworth Longfellow’s epic poem The Song of Hiawatha. The naming of the line served as an homage to the powerful Ojibwe people who ruled the Great Lakes area. 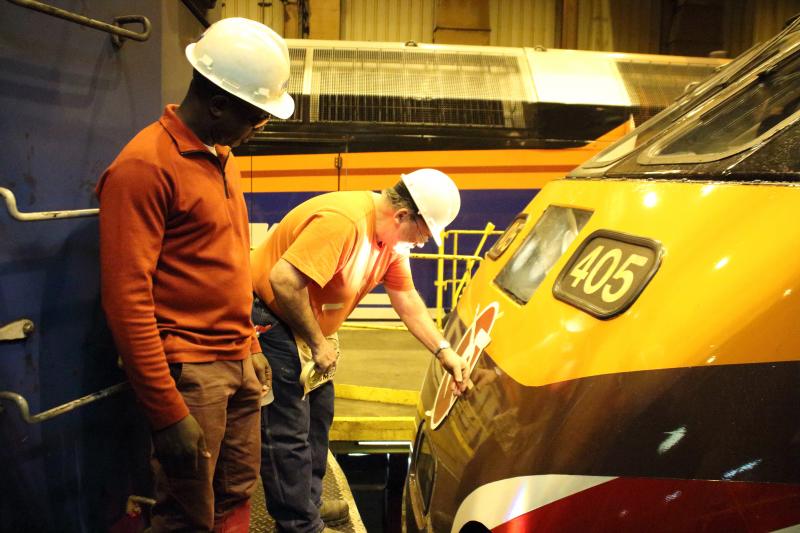 Early in the morning on Jan. 10, crew members carefully placed the Hiawatha logo on the locomotive’s distinctive orange and maroon nose, adding the finishing touch to the recently revealed Milwaukee Road heritage locomotive just in time for its inaugural run that same day.

The Milwaukee Road has played a significant role in railroad history since its founding in 1847. Originally built to connect the city of Milwaukee to the Mississippi River, the railroad eventually cut a path through the scenic northwestern part of the country from Chicago to the Pacific Ocean. Its Hiawatha routes were iconic passenger rail services in which some of the most stunning feats of steam-powered locomotion were witnessed, including the record for the fastest regularly scheduled steam run in the world. The repainting of one of Metra’s MP36-3S locomotives, number 405, pays homage to the history of the Milwaukee Road and its lasting presence. (Metra’s two Milwaukee District lines were once operated by the Milwaukee Road; they became publicly owned in 1982 when the Milwaukee Road went bankrupt.)

“Honoring the Milwaukee Road’s legacy in Chicago area covers almost 115 years of the railroad’s presence (and remembrance through commuter line naming) in this city,” said Bob Storozuk, President of the Milwaukee Road Historical Association. “So many people remember the railroad if they lived near it, rode it, or had worked for it. This endeavor salutes its history and the memories of those affected in one way or another by it.” 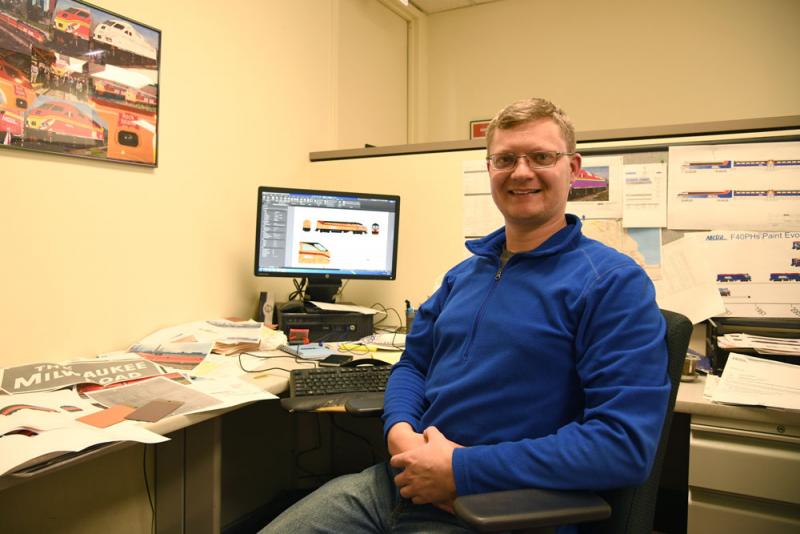 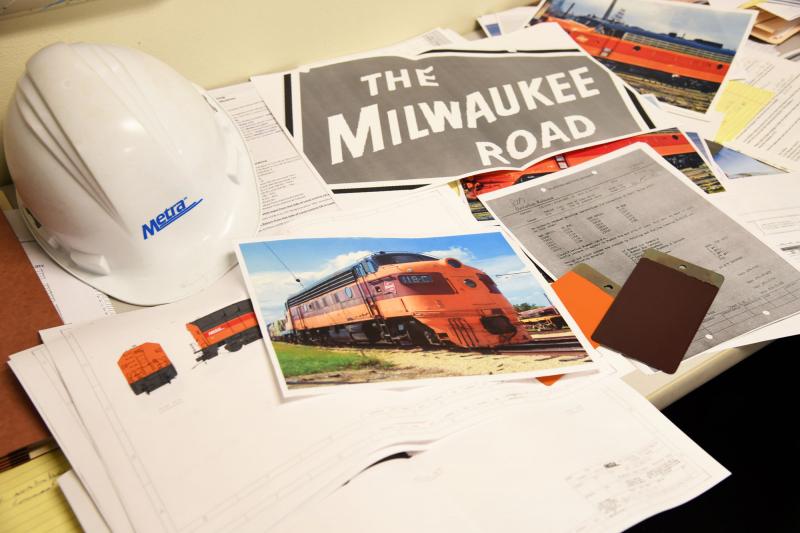 Designing the locomotive’s heritage livery started with plenty of research. Jason Thomas, a mechanical engineer at Metra, pored through countless images and drafts of the paint design in AutoCAD to find the perfect look. Though the Milwaukee Road had several paint design iterations over the decades, it was the orange, maroon and black paint scheme that was selected after months of meetings and tweaks to the design.

A department head in the mechanical capital projects department was able to track down the original EMD styling drawings from the 1950s. The only problem was that the exact color mixes were no longer being produced.

“We had to contact our paint supplier, Kelly Industrial Coatings, and tell them, ‘Okay, we have this 1950s paint code, what does that mean?’” said Thomas. “It took them about a week to find the color code, and it wasn’t an active color, so they had to mix it up.”

Once the final design was approved and the paint mixes secured, it was up to Paul Jurlow and his team in the paint booth at Metra’s KYD Facility to take the design and turn it into reality.

“When a locomotive first enters the paint booth I can already picture what the finished product will look like,” said Jurlow. “When it is finished being painted, I am satisfied knowing we did the best job we could with the canvas presented to us.” 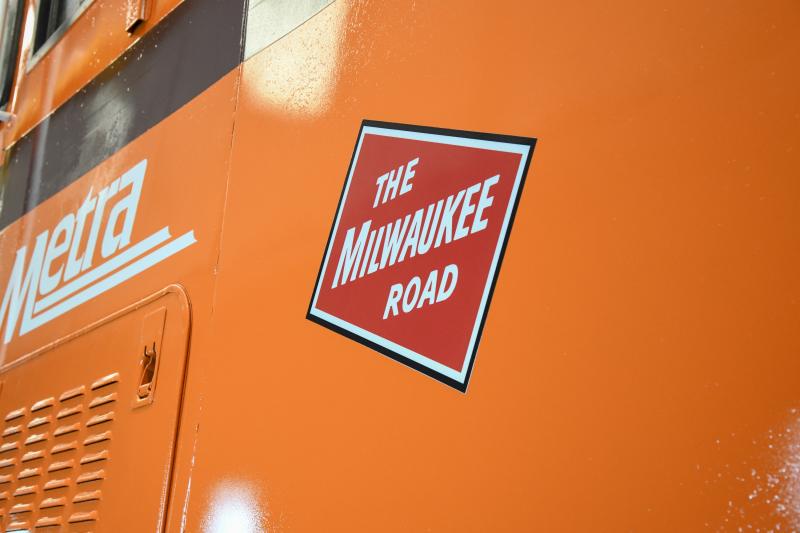 A crew of four to five men finished painting the locomotive after 12 days of work, including prepping and painting the body, applying the Milwaukee Road and Metra decals, and clear coating the locomotive to a glossy sheen. The process is like building a puzzle step-by-step, said Jurlow. “It’s a team effort. While the accolades and praise for the locomotive is well received and appreciated, I think more recognition should go to the team doing the work.”

Jurlow arrived in the cold morning at the Western Avenue Coach Yard to assist in applying the Hiawatha decal to Locomotive 405’s nose last-minute. He was accompanied by some of the same railroaders who planned to place the decal the night before, their cameras at the ready to capture the moment. The locomotive was later connected to a set of railcars and ran on its first inaugural run along the Milwaukee North Line as train 2119.

“I met the train on its first run termination at Grayslake,” said Storozuk. “It looked even better than the photos I saw when it emerged from the paint shop.”