Hundreds of switches line Metra’s railroad network. Most of the time, they work seamlessly to guide trains from one track to another. But when a single switch fails, it can delay thousands of customers.
Metra performs regular maintenance to ensure switches are working and trains continue running, but now it is also harnessing new technology at its disposal to prevent switch failures.

This summer, Metra installed switch monitors at five critical switching points throughout the system as part of a six-month pilot program aimed at reducing the number of delays caused by switch failures by 50 percent. In 2017, each switch-failure caused delay lasted an average of 18 minutes, resulting in approximately 9,000 delay minutes for customers that year. 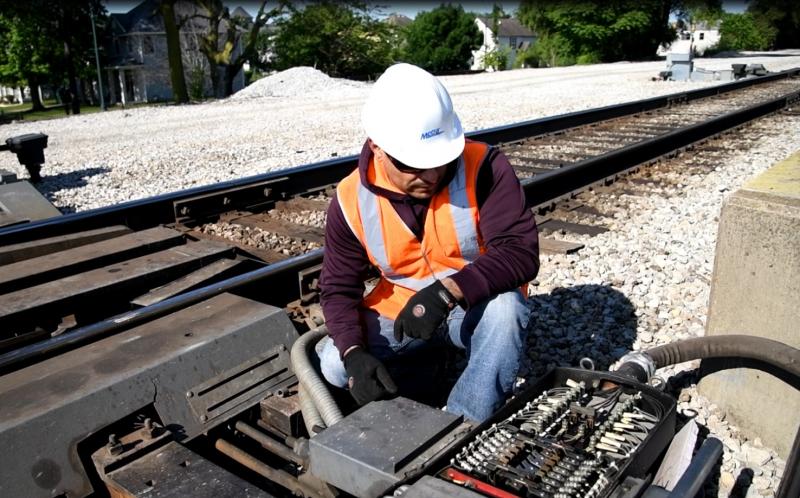 You won’t notice anything new along the tracks in these areas; the physical switches have not been altered in any way. What is new rests in the signal bungalows – small metal sheds – that sit adjacent to each of these critical switching points. A box about the size of a toaster has been wired into the system to collect data every time the switch moves. Software from Metra’s contractor, Alstom, will then feed the data through an algorithm that can help Metra determine how the switches are performing.

“Positive Train Control allowed us to connect to all these wayside units,” said Metra’s Director of Signal Engineering Al Bakotic. “Now we have remote access to the bungalows. We have all this data inside these bungalows, what are we going to do with the data?”

The first task for these monitors, known as data acquisition units, is to collect 100 readings of the electrical currents pulsing through the switches when they are thrown in order to get a baseline range of normal operating conditions. Once that range as been established, the monitor will recognize when the current falls outside of that range. Seeing a reading outside of the range is symptomatic of another problem such as ice in the switch or the mechanical components needing lubrication.

“If the switch is dragging, it’s going to draw more current, so the current will spike,” Bakotic said. “If we see the current spike, or we see it trending higher, then we know that maybe the switch needs more lubrication or maybe there’s an obstruction that hasn’t completely stopped the switch from being thrown.”

Currently, switch maintainers perform visual inspections, and the switches are tested at least once a month. Signal maintainers are also dispatched when a switch has failed and is causing delays. By collecting the data through this new monitoring system, Metra can identify potential failures, and repair or replace before a failure occurs.

“The industry is trending toward predictive maintenance using monitoring systems,” Bakotic said. “Instead of sending a maintainer out to look for trouble, we can prioritize maintenance routines to focus on emerging trouble spots to prevent failures.”

The monitors will collect data through mid-September, at which point the monitoring will go live. The pilot will run through the end of January.