Imagine making a phone call from a moving train. 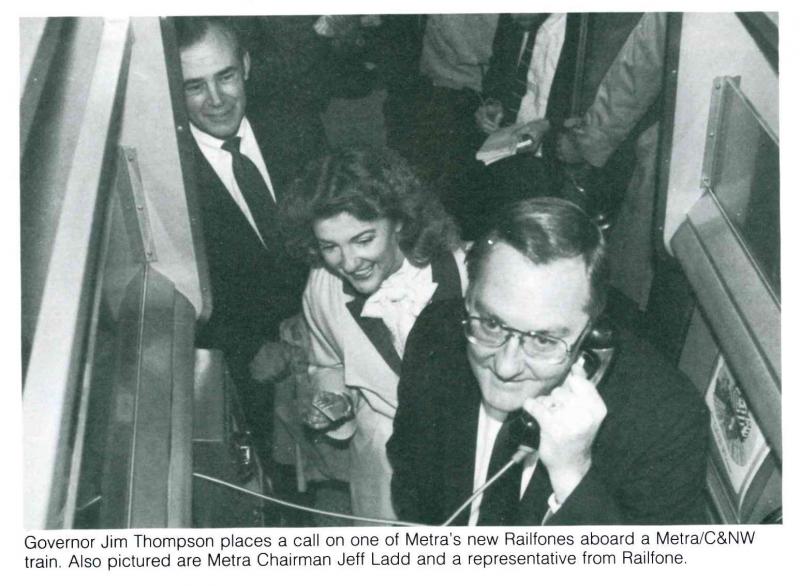 That was probably too easy. Imagine walking to a wall-mounted phone, swiping your credit card and waiting for radio equipment to communicate with the Ameritech cellular phone system so you can tell your boss you can make that meeting at 8 a.m. tomorrow.

To truly appreciate the convenience of such an amenity, it helps to step back to the time of shoulder pads and bag phones. On Sept. 13, 1985, Metra announced a joint effort between the agency and Railfone, Inc. to install telephones in cab cars on several lines. The 90-day pilot project launched Nov. 3, 1986 and ultimately included 34 phones on Metra’s Rock Island Line, the two Milwaukee District lines, all three Union Pacific routes and the BNSF Line.

Metra was the first commuter rail service in the nation to offer telephones, according to the 1986 release announcing the service. Offering an amenity that allowed customers to call their spouse, broker, attorney or boss from a Metra train helped the agency further its image as “the finest and most modern commuter rail system in the nation,” Metra boasted.

Then Metra Executive Director James E. Cole was quoted in a 1985 release as saying he imagined the service would “be especially helpful to businesspeople who may need to phone the New York markets in the morning, and to our riders who want to leave work on time in the evening, but still have calls to make.” 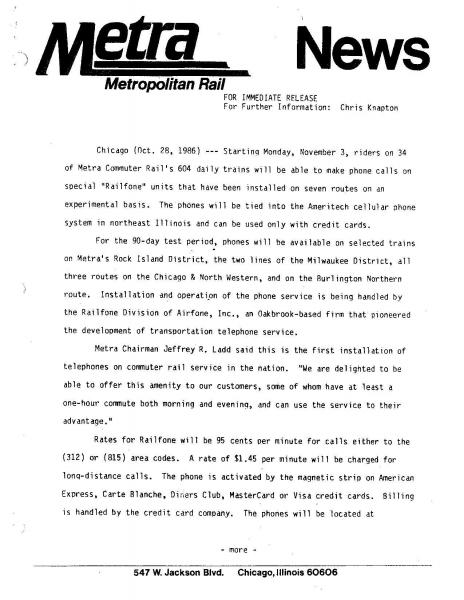 After swiping a major credit card, customers could call any location in the United States, including Alaska, Hawaii and Puerto Rico. Railfone calls cost 95 cents per minute for calls to numbers in the 312 and 815 area codes (the only Chicagoland area codes at the time), and $1.45 per minute to calls outside those area codes. The phones did not accept cash.

The Railfone experiment did not cost Metra any money. The installation and maintenance of the phones were the responsibility of Railfone, Inc., a subsidiary of the now-defunct, Oak Brook-based Airfone, Inc. The contract also stipulated Metra would receive a minimum of 5 percent of gross revenues should the number of calls reach 7,500 per month.

If the initial test run had been successful, Metra and Railfone would have negotiated a new contract and decided whether to expand the service to more trains. Cole suggested if customers took to the phones Metra “could someday have a public phone on each of our 850 bi-level coaches on all routes.”

But in the end Railfones couldn’t make a strong enough connection with Metra commuters and Metra pulled the plug on the phones. Their demise came in part because of another relic of the past. Metra riders complained the only phone on each train was often located in the smoking car, deterring non-smokers from using the service, as it was explained in an employee magazine in March 1987.