Metra can take you to Mars, no special spacesuit necessary.

OK. So it’s probably not the Mars you imagined. The terrain isn’t rocky or red and the trip seemed surprisingly short. Turns out, you’re still on earth, in Chicago’s Galewood neighborhood.

Metra’s Mars Station on the Milwaukee District West Line wasn’t named by a planet enthusiast, or after the Roman god of war. The station takes its name from the Mars, Inc. plant located adjacent to the station. Flourishing from the success of its Milky Way candy bar, in 1929 the company opened the full-production plant employing nearly 200 associates on Oak Park Avenue. A more centralized location and railroad access caused business to boom, according to company history.

The station is not alone in its unusual designation. While most need little explaining, a handful of Metra’s 241 stations have names that are not tethered to a street or municipality. 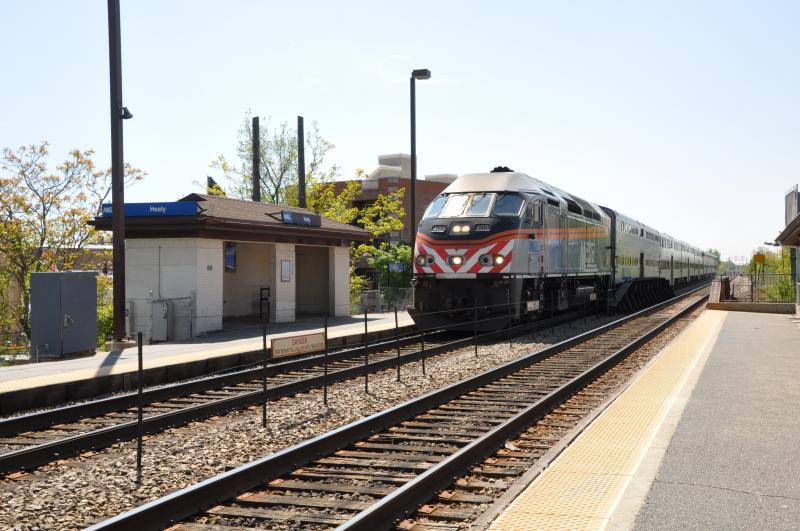 About four miles away in the Hermosa neighborhood, Metra’s Healy Station also has an unlikely namesake. The station, located on the Milwaukee District North Line, is named after the Lyon & Healy Harps, Inc., a world-renowned harp manufacturer founded in Chicago in 1864 by George W. Lyon and Patrick J. Healy. Now headquartered on Ogden Avenue, the company was located near the station at 4014 W. Fullerton Ave. until 1914.

On the Union Pacific North and Northwest lines, riders might wonder why the stop located at Ashland and Armitage avenues is known as Clybourn, when Clybourn Avenue sits a few blocks away from the station. It didn’t always. Early Chicago maps show Clybourn ended its northwest diagonal run from Division Street at the point where it meets Racine. It then turned directly west, crossing the river and ending at what is now Damen. When in later years the northwest diagonal of Clybourn was extended (eventually to Belmont), the east-west section that crossed the river was renamed Clybourn Place. That section was later given its current name, Cortland Street, after the street that it almost lines up with at Damen.

Moving southwest to the BNSF Line, the Highlands Station has a puzzling name. We asked the Hinsdale Historical Society when the question came up in 2009, and the best theory they found is that an early Hinsdale resident, John Reed, named his home “Highlands” and the name soon caught on for the neighborhood and the train station.