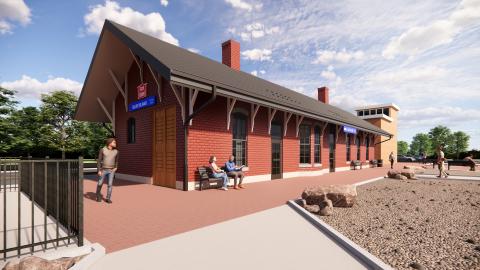 The depot, at 2300 W. Grove St. in Blue Island, was built in 1868. It serves as a station on the Rock Island mainline and as the southern end of the line’s Beverly Branch and was used by about 600 customers each weekday before COVID.

“This project will create a more welcoming, more comfortable facility for riders of the Rock Island Line while retaining its historic nature,” said Metra CEO/Executive Director Jim Derwinski. “The result will be an improved riding experience for My Metra customers.”

“On behalf of the residents of Blue Island, we are very thankful to Gov. JB Pritzker, President Toni Preckwinkle, Rep. Robert Rita and all the state and local leaders for their continued support of Blue Island,” Mayor Bilotto said. “We are especially grateful to the Federal Transit Administration, the RTA and Metra for prioritizing this vital project.  The Vermont Street station is a part of Blue Island history, and with this new investment, it will continue to be part of an exciting future for our city and our region.”

The work will include a complete interior renovation; renovation of the roof including the replacement of gutters and downspouts; the reconstruction of the original chimneys; rehabilitation of wooden eave supports; replacement of all doors and windows; custom brick replacement and masonry staining; asbestos and lead-based paint abatement; new landscaping and site improvements; sidewalk and crosswalk improvements and repairs to meet ADA compliance for accessible routes; and new wayfinding and intermodal signs.

The work, which is expected to be completed this fall, is being funded by the Federal Transit Administration, Metra funds and a grant from the RTA’s Innovation, Coordination, and Enhancement (ICE) program. The total cost of the project is about $5 million, including $3.8 million in construction costs and about $1.2 million in design cost.

The $3.1 million contract for the work was awarded to IHC Construction of Elgin, which committed to meeting a DBE goal of 25 percent. Another $700,000 will cover construction management and flagging costs.