In a small room at Metra’s Consolidated Control Facility, a group of Metra Engineering Department employees and consultants monitor an array of computer screens, watching each command as it scrolls by, matched by the movement of a train on a digitized track diagram. Behind them, a computer rack system holds the hardware and software components that make up Positive Train Control. This is Metra’s PTC lab. It’s a small and utilitarian space, but it’s critical to the development of this mandated safety system.

PTC – Metra riders and those who follow the railroad industry have heard those three letters frequently over the past few years. But what is it? What will it do?

Simply put, PTC will automatically stop a train if the engineer fails to obey a signal or exceeds the speed limit. The system integrates GPS, trackside sensors and communications units, onboard computers and Metra’s centralized train dispatching system. Together, these components track trains, convey operating instructions and monitor the crew’s compliance. Although it can’t prevent all accidents, PTC increases safety by preventing train-to-train collisions, derailments due to speeding, moving through misaligned track switches and unauthorized entry into work zones.

While the concept behind PTC may sound simple, the reality is anything but. To function properly, PTC must analyze and incorporate a huge number of variables that affect train operations. It must be able to take all these factors into account automatically, reliably and accurately in order to safely stop a train. In fact, the American Association of Railroads has called PTC the greatest technological challenge that the railroad industry has tackled in its history.

Within its lab, Metra has recreated the entire PTC communications system. From the trackside communications, to the back office systems, to the onboard computers, communications and software, the lab is a controlled environment simulating the real-time workings of PTC, enabling Metra to test the system’s responsiveness and accuracy before it goes live.

“PTC is not an off-the-shelf technology. The software must be customized to Metra’s specific operating environment,” said Chief Engineering Officer Bruce Marcheschi. “Our lab is an essential component. It’s the safest and most accurate way to ensure the system works as intended.” 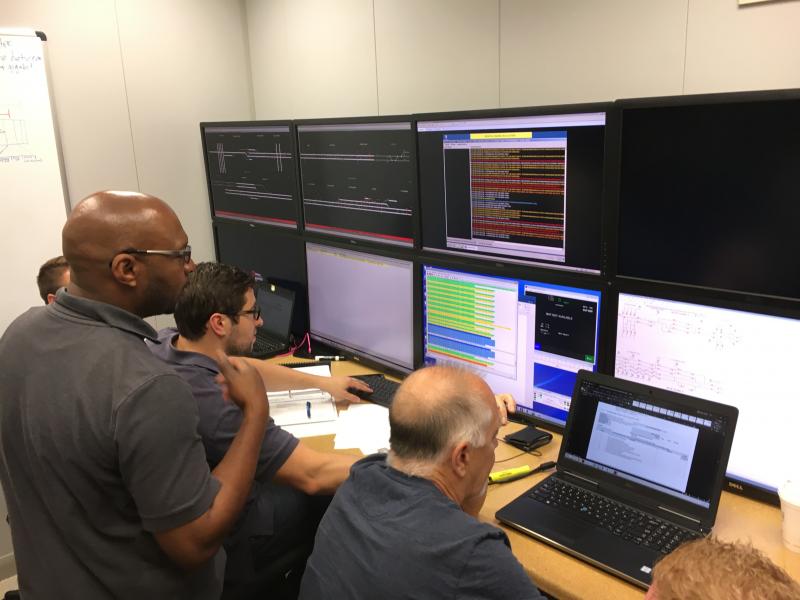 Engineers monitor performance of the communications between the train and the PTC system during a simulated train run in Metra’s PTC lab.

The lab is similar to test facilities developed by Class 1 freight railroads across the country, as all railroads work to meet the federal deadline for installation and implementation of PTC. Even when PTC is fully operational, the lab will continue to be used to test software and hardware upgrades before they are used in passenger train service.

The Chicago region is easily the most complicated operating environment in the nation and that adds to the complexities involved in developing PTC. Metra alone operates more than 700 trains every weekday. Add freight traffic and there are 1,300 to 1,400 trains on the move in the region on any given day. Metra’s system must be interoperable with the PTC systems used by the freight railroads and vice versa.

Metra and its freight partners at BNSF, UP and CN are busy installing and testing PTC components along 11 rail lines and on board all its passenger trains. To date, Metra has spent more than $150 million to develop and install PTC. It estimates that the entire project will cost nearly $400 million and an additional $15 million to $20 million annually to operate and maintain.

Metra plans to have PTC fully operational on all of its lines by 2020 in full compliance with federal law. As the physical installation of PTC components continues, the engineers and technicians at the PTC lab will also be testing and monitoring the system’s performance, so that when PTC is fully deployed in the Chicago region, Metra’s riders will be protected by a state-of-the-art safety system that functions so well that they may not even know it’s there.