Heritage Locomotive Honors Advent of Diesel Era on the BNSF

The mysterious locomotive had sat undisturbed at the shop long enough.

It arrived at the BNSF Railway’s 14th Street shop from Georgia a week earlier, its only distinctive marker an all caps black “METX 211” printed on the side of the white airtight shrink wrap covering the entire body. 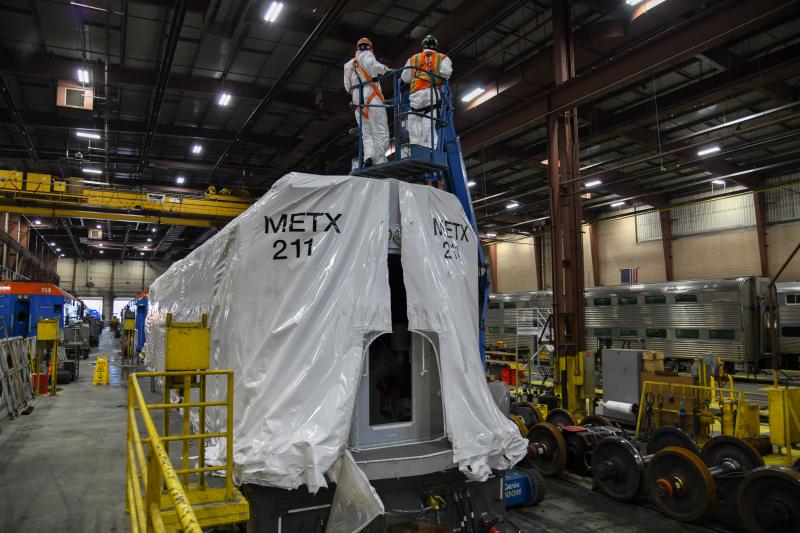 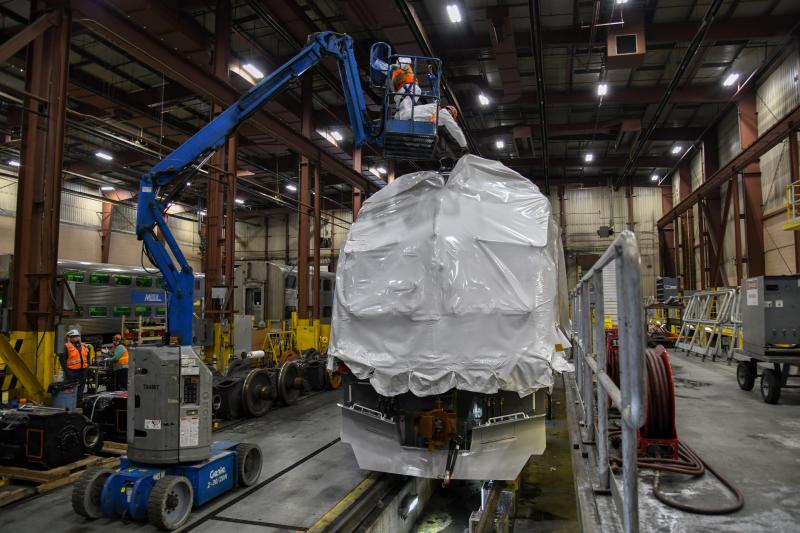 Two machinists equipped with box cutters climbed onto a scissor lift at the rear of the locomotive, cutting a slit from the rear platform to the roof. The paint scheme their slit revealed resembled something that hadn’t been seen on the BNSF’s rails for decades: a light gray body with cherry red details.

Metra locomotive 211’s new heritage design was inspired by the stainless-steel E-series passenger locomotives that ushered in the diesel era on the Chicago, Burlington and Quincy Railroad’s long-distance passenger trains in the 1940s and its Aurora-to-Chicago commuter operation in the 1950s.

Following World War II, the CB&Q – the predecessor of today’s BNSF Railway – allocated $24 million to dieselize and air condition its suburban service and replace ancient passenger cars. In 1950, the CB&Q introduced the bi-level gallery cars from the Budd Company, some of which are still in service on Metra’s BNSF Line today. The bi-level design was the last step in a progression of passenger car designs created as part of the partnership between the railroad and Budd Company. To promote its service improvements CB&Q launched a significant marketing campaign dubbed “The Land of the Burlingtons,” and named the new fleet the “Suburbanaire Service.”

By the end of 1952, the railroad had completely dieselized its suburban operation.

“With this locomotive we’re thrilled to pay tribute to the advancements that started the modern era of commuter service,” said Metra CEO/Executive Director Jim Derwinski. “This is a true collaboration with BNSF Railway and a remarkable testament to the influence the CB&Q had on passenger rail in the Chicago area.” 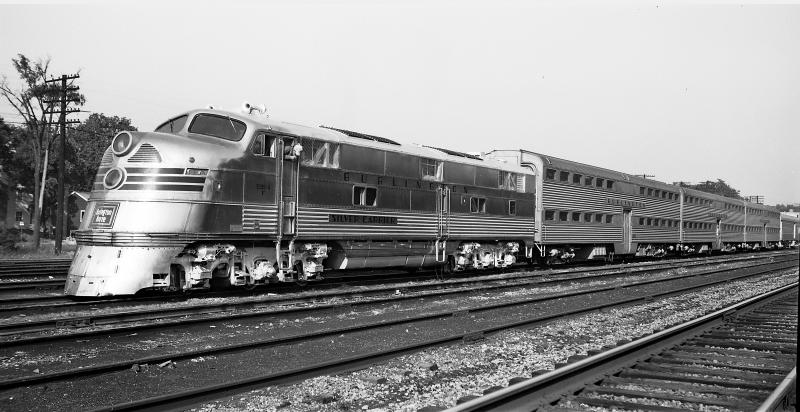 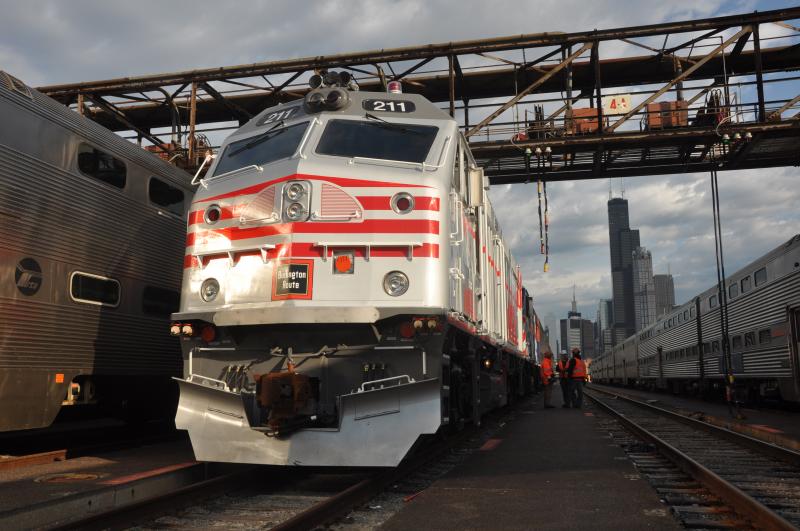 Over those decades, the partnership between the CB&Q and the Budd Company also included General Motor’s Electro- Motive Division (EMD) in La Grange. Locomotive 211 was among the last of the locomotives built at EMD’s La Grange facility, and one of 30 F40PHM-2 locomotives rehabilitated at EMD’s successor, Progress Rail Services Corp.’s facility in Patterson, Georgia. They were built between 1991 and 1992 in the same place where the CB&Q’s E-series locomotives had been manufactured some 40 to 50 years earlier.

All locomotives receive a fresh paint job as part of their complete overhaul. This is Metra’s third locomotive to be painted in heritage colors. The first was locomotive 425, painted in Rock Island colors and named for former CEO/Executive Director Don Orseno. The second was locomotive 405, the Milwaukee Road heritage unit.

When contemplating how to adorn the heritage locomotive honoring BNSF, Metra personnel first considered the green paint scheme that would have been seen after Metra was formed in 1984. But after collaborating with DJ Mitchell, BNSF’s assistant vice president of passenger operations, the plan switched to a paint scheme from the 9900 E-series locomotives, paying homage to a time that transformed the commutes of thousands in the Chicagoland area.

“We are honored that Metra has chosen to celebrate the BNSF’s rich passenger heritage and commitment to innovation,” Mitchell said.

Metra’s mechanical personnel used EMD’s October 1949 styling and painting guides for the E9 to create the design for 211. They selected a light grey paint to cover the entire body to simulate the stainless-steel look of the E-series.

Then, they moved onto the nose: four bold red reflective stripes running from one side to the other. Next, it was on to a more nuanced detail. The original E-series locomotive featured two false vents on either side of the headlight. This feature mimicked the actual vents on the Pioneer Zephyr of the 1930s.

“We asked ‘how do we mimic that?’” said Metra Mechanical Engineer Jason Thomas. “This is going to be paint or a decal, we’re not putting in actual vents, and the ones in the 50s were painted on to mimic the Zephyr. So we can put it anywhere; do we want it like the Zephyrs, which were up on top where we have the number boards or do we go with the more 50s style?”

Thomas and others ultimately chose the latter for the faux vents, giving 211 red quarter circle decals printed on 3M clear vinyl on either side of the headlights. Below the headlight sits the Burlington Route logo, which Metra had to receive written permission from the BNSF Railway to use. A black rectangle with “E9” vertically stacked on either side of the original locomotive became “F40” on Metra’s 2019 iteration. The final detail was a red half arrow leading into a stripe that runs along the locomotive. 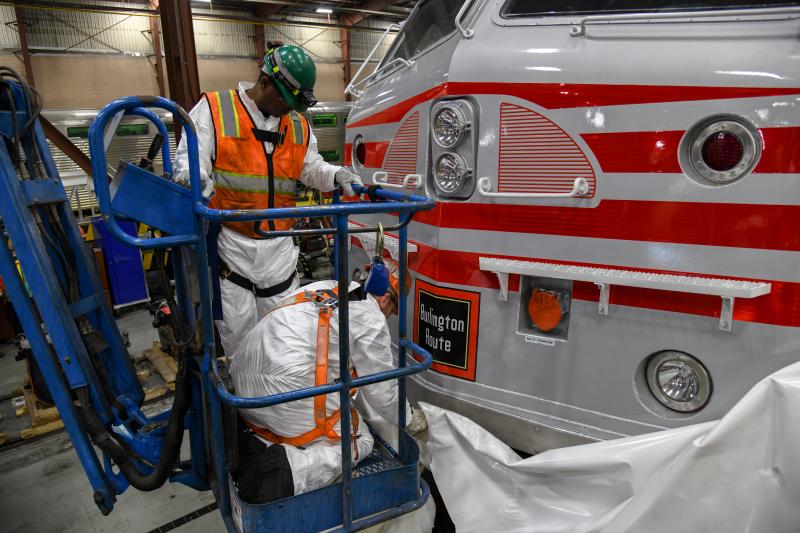 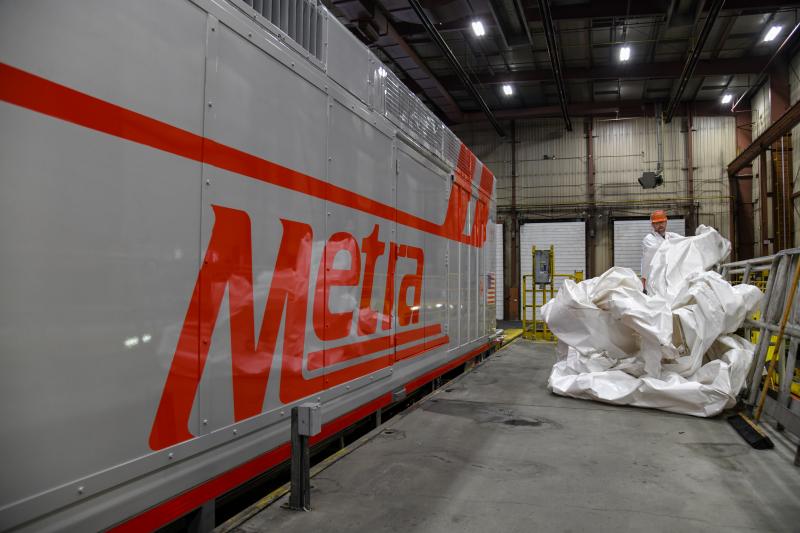 Once the design was complete, Metra handed it off to painters at Progress Rail to execute the vision. The team in Patterson understood the trust Metra had placed in them to keep the heritage design hidden, said facility manager Billy Thompson. They took care not to ruin the 280,000-pound, 56-feet long, 16-feet tall surprise by covering it in shrink wrap before it rolled back to Chicago.

“When a customer allows you to be part of such an exciting project, you make sure the team knows to take it seriously and deliver – and that they did,” Thompson said. “It was a great opportunity to watch it come to life.” 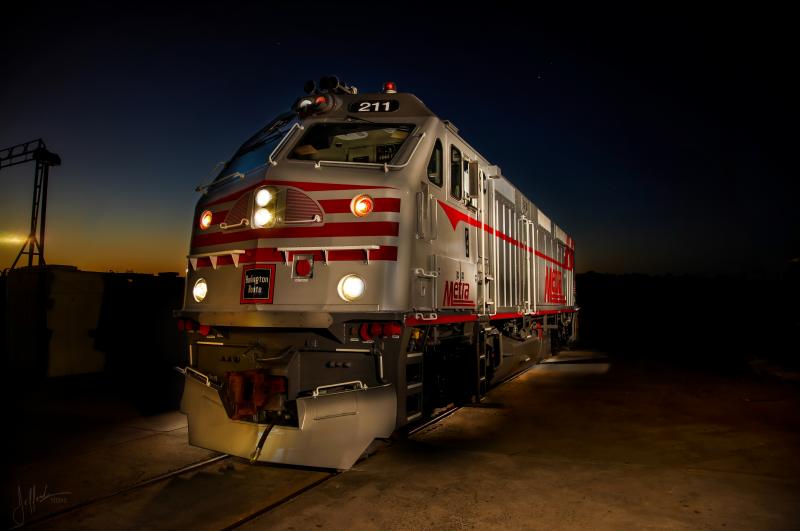 Locomotive 211 after it was rehabbed and painted by Progress Rail in Patterson, Georgia. (Photo by Steve Jeffords)

Locomotive 211 arrived the BNSF’s 14th Street diesel shop, where BNSF services and repairs the cars and locomotives used on the BNSF and SouthWest Service lines, on Sept. 26 with strict orders from Metra’s Chief Mechanical Officer Kevin McCann not to remove any of the shrink wrap until Metra personnel could be there to document it.

Finally, after more than a week of anticipation, the wrapper came off Oct. 4. Machinists first cut the slit up the back, then made their way along the roof, sending the shrink wrap gliding down the side of the locomotive to reveal details one by one: the American flag, the RTA logo, the red stripe and “Metra.” Then the blade slid down the front of the locomotive, giving everyone their first glimpse of the details that harken back to those transformative years in the 1950s.

The locomotive embarked on its inaugural run on Oct. 15, hauling behind it cars 800 and 801, original Budd cars that made similar runs with the 9900 E-series locomotives in the 1950s. It will continue to evoke nostalgia on the BNSF Line as part of the regular locomotive fleet. 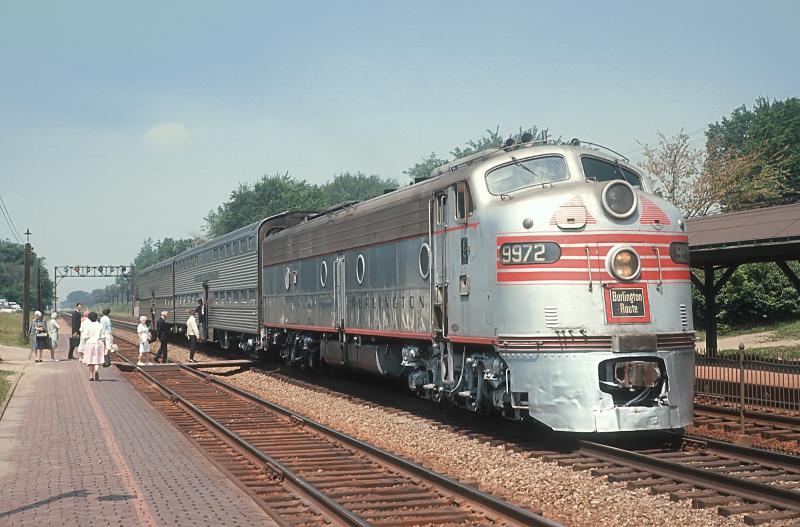 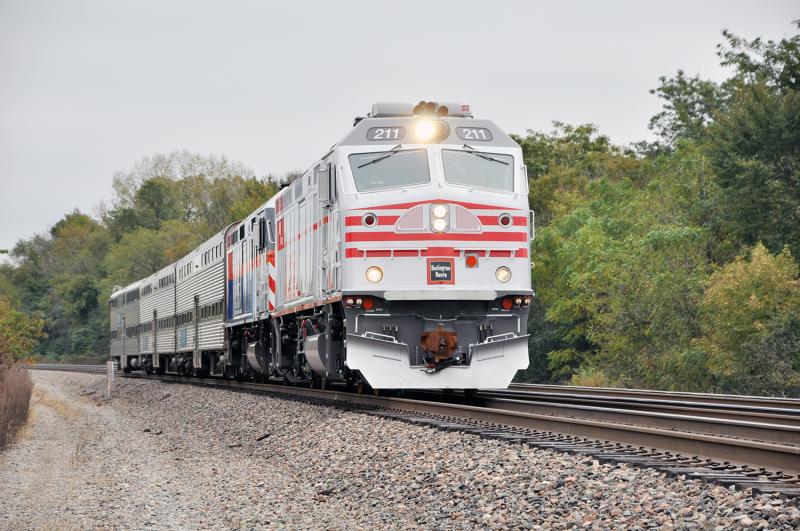