The first locomotive rebuilt under a $91 million remanufacturing contract has returned to service, the agency said today. The work is a major part of a broader modernization plan to rebuild and replace nearly all the rolling stock that operates on Metra’s non-electric lines.

Albertville, Ala.-based Progress Rail Services Corp. was awarded the contract in 2015 to rebuild 41 EMD F40PH-2 and F40PHM-2 locomotives to “like new” condition. The locomotives were manufactured between 1989 and 1992. The work, being done at Progress’ Patterson, Ga., facility, is expected to extend the life of the locomotives by 10 to 13 years.

“These locomotives represent our commitment to use our limited capital resources to rebuild our fleet of railcars and locomotives, which remain the oldest of any of our peer railroads,” said Metra Executive Director/CEO Don Orseno. “Our customers deserve a reliable fleet and this program, which restores locomotives to nearly new condition, is an essential part of our agency’s modernization plan.” 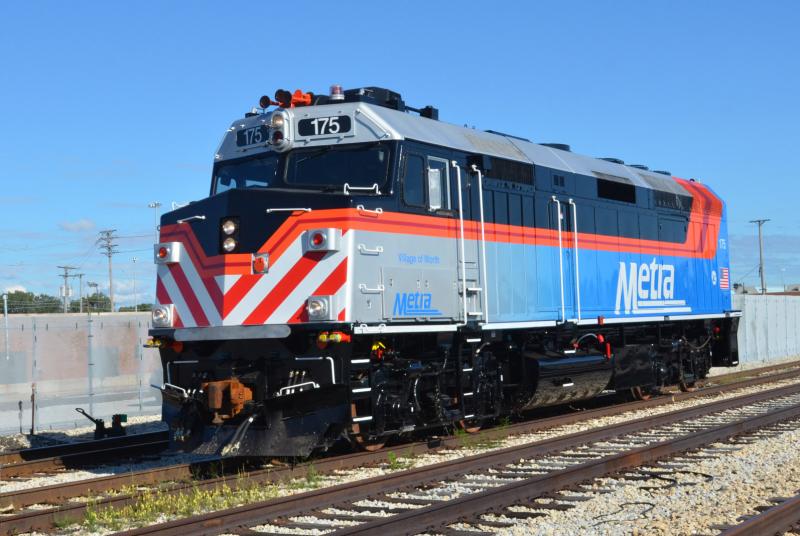 Locomotive 175 also features the railroad’s new paint scheme previously applied to F59PHs Nos. 97-99. The paint scheme, which is an adaptation of the colors applied to Metra’s MP36PH locomotives, was developed by Metra Engineer Kyle Nanfeldt. Metra plans to use a version of it on all future rebuilds and locomotive acquisitions.

Metra has identified modernization of rolling stock as one of its highest capital priorities due to the age of its fleet and the fact that the condition of cars and locomotives is so essential to providing high-quality, reliable and comfortable service.

Fifty percent of Metra’s rolling stock is in marginal or worn condition, with 18 percent of railcars dating from the 1950s to the 1960s. By the end of 2016 we will have renovated about 70 cars in-house, and we will soon begin planning the expansion of our major rehab facility so we can do more cars per year. We also will have modernized about a dozen locomotives, some in-house and some by a vendor. The agency’s in-house railcar rehabilitation program is the largest and most productive of any railroad nationwide.

Later this year, the agency will begin design of a $20 million expansion of its main railcar rehabilitation facility at 49th Street and the Dan Ryan Expressway in Chicago. The renovation of this facility, which was built in 1947, will enable Metra to increase its throughput of rehabilitated cars by 33 percent. Construction work to update that facility is expected to begin in late 2017.