Fighting with Fire: Switch Heaters at A-2 | Metra

Fighting with Fire: Switch Heaters at A-2

Snowstorms and winter weather affect more than the road conditions in the Chicagoland area; they affect the railroad, too. One particular issue caused by winter weather is snow- and ice-clogged switch points, which can bring a train (or several) to a halt until the blockage is cleared. At A-2, Chicago’s busiest interlocking, clogged switches could cause rolling delays that upset many people’s commutes. How do we combat this? One way is with fire.

Some riders may have seen the open flames licking the rails at the A-2 interlocking. Despite popular belief, the tracks themselves are not on fire. Instead, the flames come from a gas-fed system that runs adjacent to the rail, generating heat on the critical areas where the switches are supposed to make contact. Without that contact, the switches default to “fail-safe” mode, which means any trains that need to pass through the interlocking will have to wait until the switches make contact with the rail and complete an electric circuit. Until then, train movement is halted. 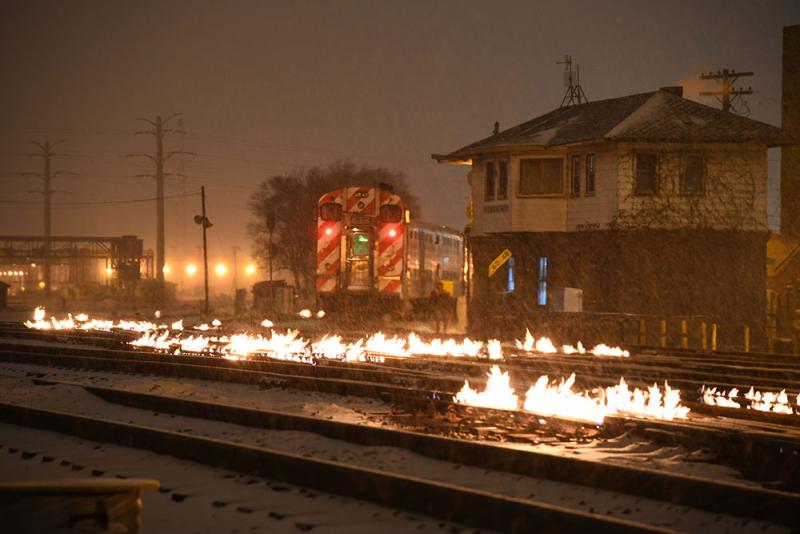 The heaters help keep the switches clear (although sometimes the snow and ice falls too fast or falls from the underside of a passing train and the switches need to be cleared manually with brooms, shovels or picks).

Switch heaters come in a variety of forms. In Metra’s yards, Calrod tubular heaters use electricity to generate radiant heat at switch points. Hot air blowers, which use a combination of gas and electricity, clear other switches in other parts of Metra’s system. However, while the Calrod and hot air blowers are prefabricated systems that Metra purchased, the gas-fed flames at A-2 were customized explicitly for that interlocking.

John Meyer, director of engineering for the Milwaukee District, said that while the hot air blowers are ideal for heating switch points, they aren’t used at A-2 due to the density of the switches there.

“At A-2, with the configuration, there’s no way to put them in the middle of the plant,” said Meyer. “You’d have to put pipes across all the tracks and then they’d lose heat.” 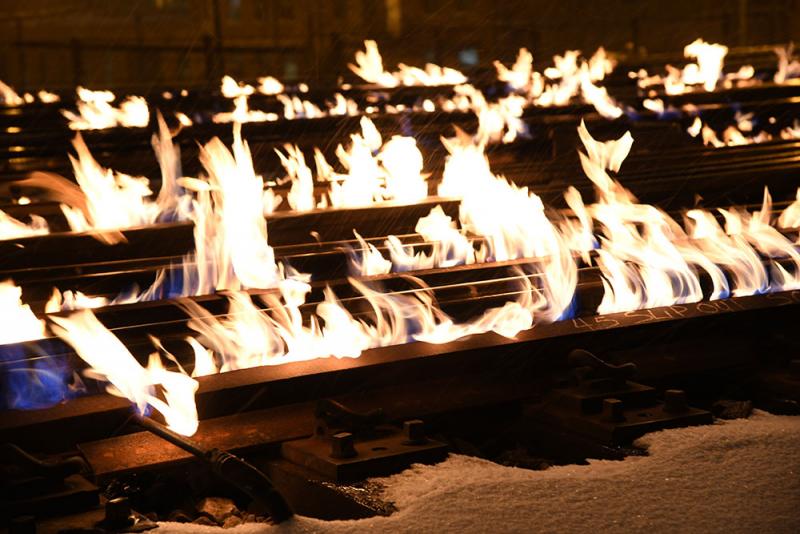 Before the installation of the gas-fed heaters, maintainers relied on more interesting (and far more dangerous) systems of melting snow and ice. Workers had to fill what were called “smudge pots" with kerosene, stick them in the spaces between the track ties and light them. This was all done by hand.

“We all used to carry this stuff, I called it skunk oil,” said Meyer. “We poured it in a two-gallon can, poured it out, and threw a match in it, and it’d start a fire along all the rails. We’re talking in the mid-70s. Nowadays you’d get in big trouble doing that.”

The fires at A-2, though far safer than the days of smudge pots, still cause some damage to the ties. Typically, a few ties must be replaced every year due to heat damage, but ultimately there is far more control over the flames, making them not only safe but effective. Maintainers light the heaters by hand and can moderate the flow of gas, which makes the flames larger or smaller, depending on need. Additionally, at least one maintainer is stationed at the interlocking every second the heaters are lit in order to monitor the flames. It’s important to note that diesel fuel combusts only with pressure and heat, not open flames. Therefore, operating our locomotives and railcars over the switch heaters is completely safe.

Winter weather will always be a challenge for the railroad, and though no railroad is free of switch issues, innovations like the switch heaters at A-2 help alleviate some of those obstacles. As conversations about the upgrade of the A-2 interlocking system continue, so too do discussions about the future of the interlocking’s switch heaters. Will the flames eventually be replaced by hot air blowers? Will some new technology be developed to better clear the ice dropped by railcars and locomotives? The answers remain unclear. But one thing is certain. Metra will continue to pit fire against ice to keep trains rolling.