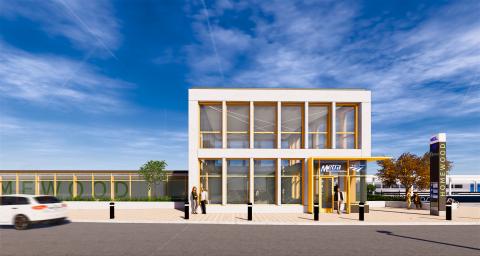 The Metra Board of Directors has awarded a $14.5 million contract to renovate the Homewood Station along the Metra Electric Line.

The work includes the construction of a new, ADA-accessible east headhouse, including a ramp; the renovation of the platform, wind breaks, warming house, and gatehouse; installation of new drainage, ventilation, lighting, and interior finishes in the existing 1911 tunnel; and replacement of the elevator connecting the tunnel to the platform. Also included is the construction of a new Pace bus facility, including a drive aisle, three bus slips, a covered waiting area, and driver relief facilities.

“This project represents a significant upgrade to the Homewood Station and its pedestrian tunnel,” said Metra CEO/Executive Director Jim Derwinski. “It will not only create a more welcoming, more accessible station and tunnel for Metra and Amtrak customers, but also a more welcoming gateway for Homewood’s downtown retail district and residential areas.”

The Metra project follows a significant investment by Amtrak to rehab its part of the shared facility. That work added an enclosed ramp on the west side of the tracks, allowing all customers to access the tunnel under the tracks to both the Amtrak and the Metra train platform; other ADA improvements to the unique former Illinois Central Railroad station (built in 1923), including the waiting areas and restrooms; and a level path between the building, parking, and the stairway/ramp entrance to the tunnel.

The Metra contract was awarded to IHC Construction of Elgin, which committed to subcontract 30 percent of the work to DBE firms. The work is scheduled to begin next spring and will take about 24 months.

Homewood and Metra pursued federal Shared Transportation Program (STP) funds to support construction of the project. The project was awarded $9.25 million of federal STP funds and local matching funds were provided as required to secure the discretionary grant. The rehabilitation of the station will also be funded with the support of Pace, Cook County, and other funding sources.