After nearly a decade without a capital program, Chicago’s public transportation system will receive a much needed infusion of funding with the passage of the Rebuild Illinois bill. The $45 billion program provides the Chicago region with a long-sought stable source of annual revenue for capital investment in public transportation as well as $2.7 billion in bonding for transit capital projects over the next five years.
While some of the details of Rebuild Illinois are still being ironed out, including the exact allocations to each of the region’s transit operators, Metra is very pleased with the program approved by the General Assembly and Gov. Pritzker, especially the inclusion of an annual, stable and sustainable allotment of capital funding. 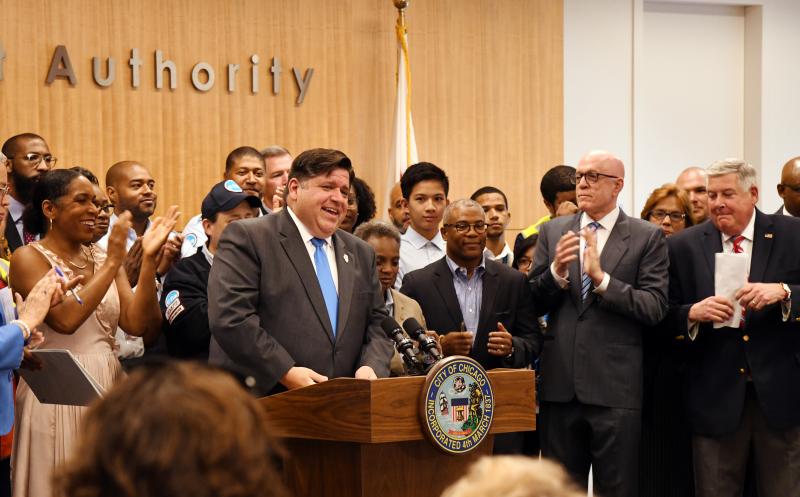 “This will help us begin to tackle our biggest capital priorities, including locomotives, railcars, stations and bridges,” said Metra CEO/Executive Director Jim Derwinski. “We thank everyone in Springfield for their support and recognition of the important role that transit plays in the Illinois economy and environment.”

“Together we passed the largest, most robust capital plan in state history, and we did it in the very best traditions of democracy: a bipartisan commitment to better the lives of all our people,” tweeted Illinois Gov. J.B. Pritzker before signing the program into law on June 28.

Through the legislation, the Chicago region will receive about $227 million per year in sustainable “pay as you go” funding specifically for capital investments in transit. An additional $2.7 billion in bonding revenue for the region over the next five years will allow Metra, CTA and Pace to begin to address an overwhelming backlog of capital needs, and provides the stability of resources essential to the effective planning and programming of projects.

“Illinois is a global hub for commerce and a transportation center for this nation. But the foundation of that economy, the very infrastructure that moves goods and people, has been left to crumble for decades,” Gov. Pritzker added in another tweet stressing the importance of the program to Illinois’ economic viability.

An annual sustainable source of funding for capital projects will make it easier for Metra to pursue additional bonding or other financing opportunities that could allow us to accelerate the replacement of our aging fleet of locomotives and railcars. While Metra has had the ability to bond, the lack of a sustainable source of funding to pay off any financing has prevented us from pursuing these types of financing opportunities.

Last fall, Metra identified priority projects that would require a $5 billion commitment from the state. While Rebuild Illinois does not provide all of the funding we requested, it is a significant step in the right direction.

One of our highest priorities on this list and the one that will provide the most immediate benefit to our riders is the purchase of 40 locomotives. Newer locomotives will increase the efficiency and reliability of our ervice and benefit the environment by producing lower emissions. We would also be able to pursue a plan to convert 54 locomotives to AC propulsion to increase reliability and reduce maintenance costs as this type of motor is much more durable, with greater acceleration and performance.

Our next highest priority would be to purchase 400 new cars to further increase service reliability. We have already issued a request for proposals (RFP) from vendors and are looking to buy not just new cars, but ones that are designed with amenities that will improve our customers’ overall experience.

Rolling stock purchases are only part of our plans. We will be using Rebuild Illinois funds to replace bridges that are more than 100 years old and upgrade track and signal systems to reduce delays. We would also improve our existing stations by making more of them ADA accessible and adding amenities such as more customer friendly signage and information displays as well as cameras, warming shelters.

Rebuild Illinois recognizes that a well-maintained public transportation system is vital to the Chicago region. As we begin planning our 2020 budget later this summer, Metra, RTA , CTA and Pace will be working closely with the Illinois Department of Transportation to determine how to maximize the benefits of Rebuild Illinois for everyone who lives and works in our region.